Where did the year go?

hello there.
you may recall that we were planning rides for all the family through this summer.
We started well with the family treasure hunt - despite it being mothers day and then raining on us.
But May was too wet - although one family braved it but could not find a cafe.
June was the cycleway rides - 25 miles - did anyone do that one?  it was even wetter than May, I think.
July and August I had somewhat given up, although we went to New Forest rides, which was great fun.  There are competitions for small people,and a time trial, lots of varied rides each day.  The new site they are using, now the second year, has its own outdoor-but-heated swimming pool - which was also great!
Then September - which has nearly gone - we planned a new Audax,  short ride of 50km, two weeks ago.  (short compared to the 100 and 200 km's!!).  I did ride that, and we had a very nice day (despite the forecast), and a very nice route (if I say so myself, having planned it last year!).
So that only leaves one more ride for the year - another Audax on the 22nd October.  Meeting over at Bala it is a 60km ride, for which the plan was to build up towards over the summer - but that has not happened!  However, you are still more than welcome to join us - let me know if you want to come and I will send you more information.  If the weather holds it will be beautiful!
I think there is a real wish for family rides in Chester, but I am afraid that although I have the enthusiasm, I do not have the time, and I have missed the chance with my two who are now teenagers and cannot get back out on a bike!  one day.
Happy to support and advise anyone who can and wants to take this initiative on; but I will not be planning any dates or rides for next year.  It is a shame, as i believe children riding together maintain and sustain their riding for longer.
Hope to see you in Bala, or somewhere soon!
Sue
Posted by Purple Sue at 13:28 No comments:

Hi everyone.
I am not sure how successful we are with these rides! I now cannot lead next Sunday afternoon - something has cropped up and as I am a lone force in starting these rides I have no-one to back me up.
Is anyone able and willing to step to the fore? happy to suggest a route if anyone can help out?  In fact - I have the route from the last planned ride in May still so no planning needed at all!
leave a comment or email me.
Sue
Posted by Purple Sue at 16:09 No comments:

Aaah, well it was a good plan, to invite everyone out the following week.

But everyone is busy (who got back to me) - so I will abandon the second attempt and leave May alone.

Hopefully the weather will be better in June.

I think I forgot to mention - although I will go out whatever the weather on my bike, and ladies rides go ahead regardless - when it comes to children I am likely to cancel.

I have always held the philosophy that for me, if it rains, I get wet.  If it ius raining when I set off, I am going to get wet.  However, for my children - although they have been out in the rain - I have always thought not to drag them out if it is cold and wet (especially when they were younger and in childrens seats).
﻿ ﻿ On the other hand, I am eternally optimistic.  So rain at 9 O'clock does not necessarily mean a 1pm ride will be cancelled.  I am tempted to wait till, oh, say 5 to 1 before I decide!

So, although a few people had said they were coming, only one family turned up.  I had also been running late so did not even have my daughter with me, nor had I had any lunch.

(note to self, must get organised!)

﻿ ﻿
Anyway, I have evidence of family participation here; and they set off to the Blue Moon (my back up plan for yesterday's ladies ride!).

I am proposing to try again next week, if anyone is free?
Posted by Purple Sue at 09:26 No comments:

﻿
﻿ We have officially started now, with a quite successful treasure hunt.  Successful in that people turned up, despite April showers and Mothers day (and birthday parties), and everyone completed the clues and route and although everyone got lost (thanks to my left and right confusions) - all was well in the end!

Five families braved the changeable weather, and once clue and direction sheets were given out, everyone set off.  15 minutes later my family arrived - so we could follow on behind.  I can't comment on the route - I planned it!   suffice to say I think people enjyed the afternoon.

We all met up at the Hungry Horse pub The Rake at Little Stanney, and were the only ones still sat outside when it rained!  During a brief interlude, the hungry horse himself came out to wave his arms about and scare the children (!!! - no, no-one was scared), and pose for a photo - have you seen us in the paper?
﻿
﻿ ﻿ ﻿
I rode with a few families, before shooting ahead so I could get back to the car and base to get the cerificates ready.

I believe everyone enjoyed the day despite final rain shower - at least no-one else got HAILED on like me!!! 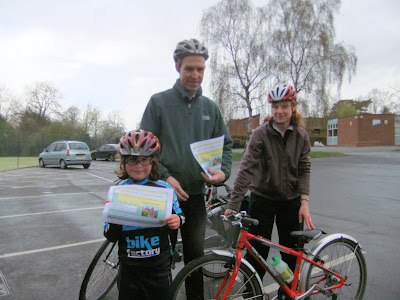 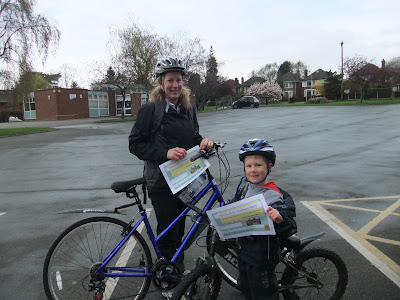 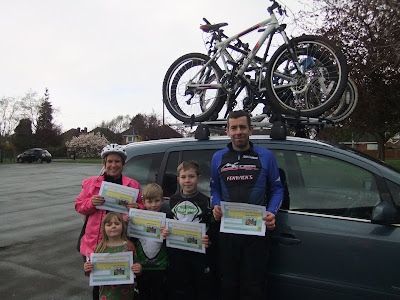 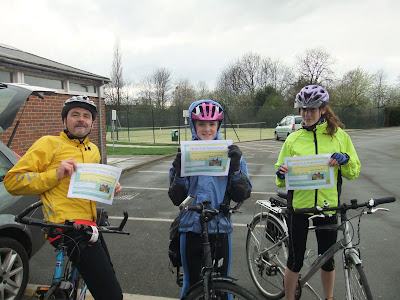 eeek!
I am lucky in that the route I have selected for the family ride is mostly my routes to and from work, so I cycled in today and will be able to check on my way home how the roads are.  May need to add 'mud in road' to risk assessment - and I think 'animals' may be needed as I encoutered a doggy last time I rode.

The weather, however, has turned a bit 'March winds' on me, and I believe the forecast is not good at all for Sunday - oh no!!!!!!  I will be there whatever the weather - so waterproofs at the ready!

The ride has now also been advertised through Bike Boost cycle challenge - although it says treasure hunt followed by treasure hunt, which is not strictly true!

I have also had a query from someone about how much of the route is off road - currently only a short bit through the zoo, but I can amend the route on request at the start if you have a map with you, so that there are more off road sections.  However, I must say the lanes in use are very quiet, and by going on different route you will miss some clues!

I have had confirmation that I can use the library car park though!

See you Sunday.  Feel free to post any questions in the comments below.
Posted by Purple Sue at 04:42 No comments:

Three weeks to go and counting!

﻿
﻿ I have spent a beautiful afternoon riding the route for the 3rd and making up clues!  Just need to type them up in some sort of order and decide which questions I am going to use. 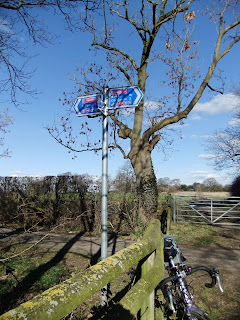 Hope the weather is this nice for the family ride! 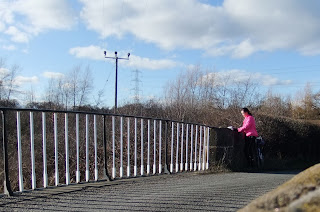 I did ask my girls if they wanted to come with me and help with setting the questions and comments about the route, but they resisted and I went alone.  Two hours later I get back - and within 5 minutes my youngest says "can I go for a bike ride?"  Aaaargh!

I had a very helpful conversation with a lady from the Parish Council last week.  She was going to check it would be OK to use the Upton Library car park, and is getting back to me.  She also suggested I may need to contact Highways about putting up a banner - although I do not think there is anywhere to hang it!
Also, Stephanie from Marketing was most helpful with a comprehensive email suggesting who I can contact to advertise the rides, and to put it in the 'Cycle Chester' newsletter (I was just in time!).
I have put an event on facebook, and had one enquiry so far...
Still to do....Contact Ross from Bike Club and finalise some details (or find out what I need to finalise!); contact Paul from Go Bike to share ride information and invite his riders; risk assessment?; local paper to put a note in the clubs and activities.
I'm sure there is more!
﻿
Posted by Purple Sue at 12:48 No comments:

(an Audax ride, from Bala)